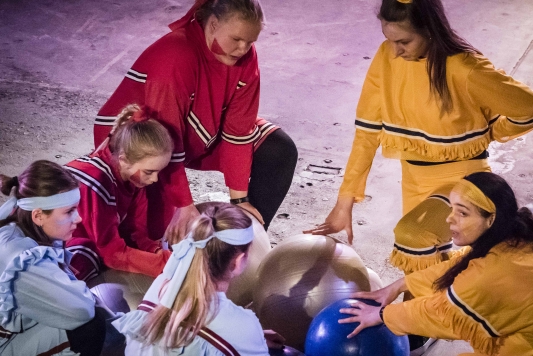 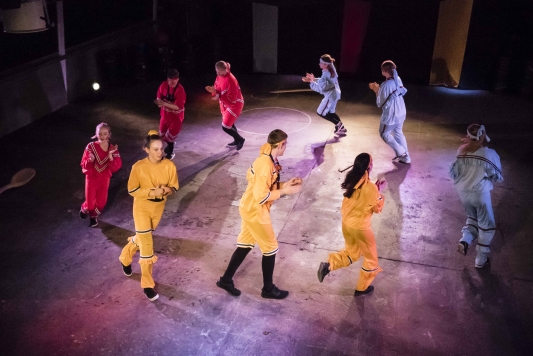 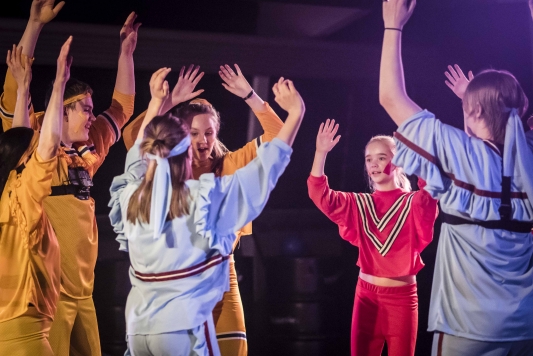 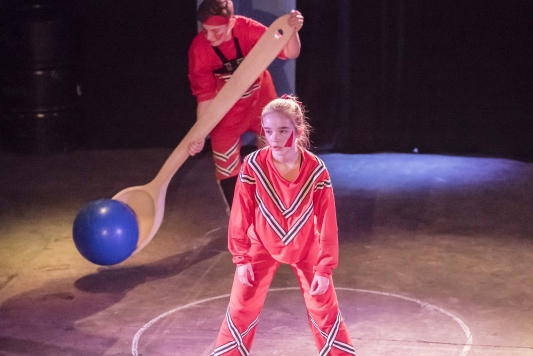 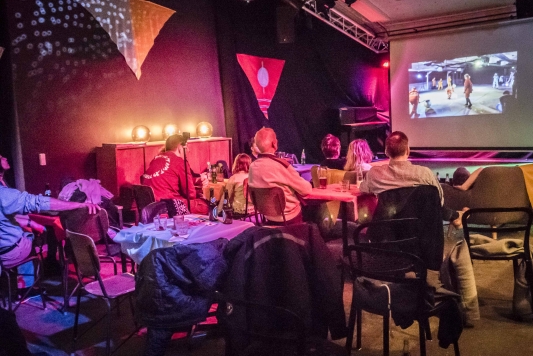 Spoon Ball Tournament
3 teams dressed in the colors red, yellow and blue are assembled to play a tournament in the game of ‘Spoon Ball’. The principles of the game were developed by Molly Haslund and the game’s objective is to score the most goals which must be achieved by each of the three teams' ‘spoon players’. They are equipped with an oversized spoon with which they must try to get the balls in the goal, while the court players must make sure to get as many balls as possible delivered over to their spoon player. Small and large circles are drawn on the floor, which indicate the target area for each team and the player's court position, respectively.

The game consists of 9 participants as well as 1 ball picker and 2 commentators. Haslund also takes part, playing on the yellow team. All the players during this match came from Køge Ungdomsskole. The tournament was held at Tapperiet in Køge, where the audience was also involved and became part of the performance.

While the tournament takes place in one room, the audience is placed in another, where they follow the match, which is broadcast live on a big screen. Here, the room is staged as a sports pub, with bar, tables, chairs and a big screen on the wall. At the start of the tournament, the commentators make the audience aware that the color-coded tablecloths on the tables connect them with one of the three teams. They are encouraged to send good thoughts to the team and cheer encouragingly.

At Tapperiet, the first of three rounds was won by the blue team, whose fans, as a thank you for the good transferred thoughts, were invited up on a balcony in the games room, from where they could experience the tournament live.

Dressed in specially designed game suits, with painted faces in the three team colors, the players enter the field with battle cries and a rhythmic clap. Here, the recognizable ceremonial practices from important sporting events are imitated which the young people themselves helped develop.

The two commentators employ a rhetoric intonation that builds the tension and emphasizes the drama of the match. Their tone mimics that of the media when reporting an authentic sporting event on radio or television. This parody is further stimulated by the fact that the documentation of the match is a live broadcast, which some audiences experience exclusively via the transmission. In doing so, the same intoxication and audience enthusiasm is curated, equal to that of major international matches and sporting events such as the Olympics, Tour de France and World Cup.

Spoon Ball Tournament as both a game and performance, includes props, costumes, staging, audience participation as well as a live streaming of the match to create a genre of art describable as "the scenic now". The overall work thus consists of both “live performance” as well as a documented piece. With iPhones strapped to the players' bodies, stationary cameras and the cameraman's recordings of both the match and the audience, the performative aspects are revealed, which have subsequently become a 22-minute documentary.

The outcome of the match, the audience's behavior, the live commentary, as well as the players' reactions to the course of the match unfold in an unpredictable way and create a gripping vitality. Live streaming creates a kind of sovereignty stimulating a sense of authenticity, as the collectivity of the audience, team spirit and competitive energy becomes sincere emotions. With seriousness and focus, the three teams compete in the tournament while simultaneously being performative humorous parody of the sporting world through a series of explicit game rituals including the kit designed exclusively for each individual, the peculiar playing field and not to mention the ridiculous oversized spoon.