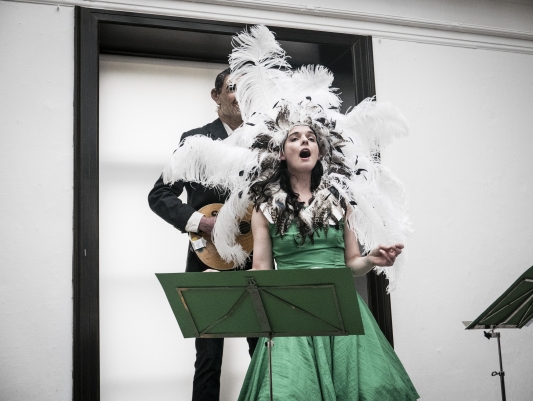 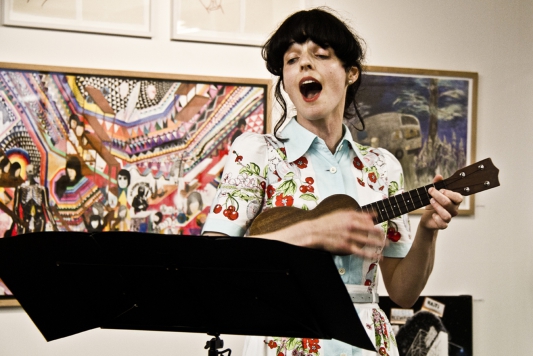 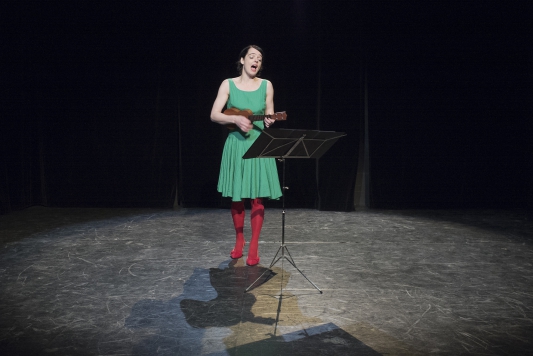 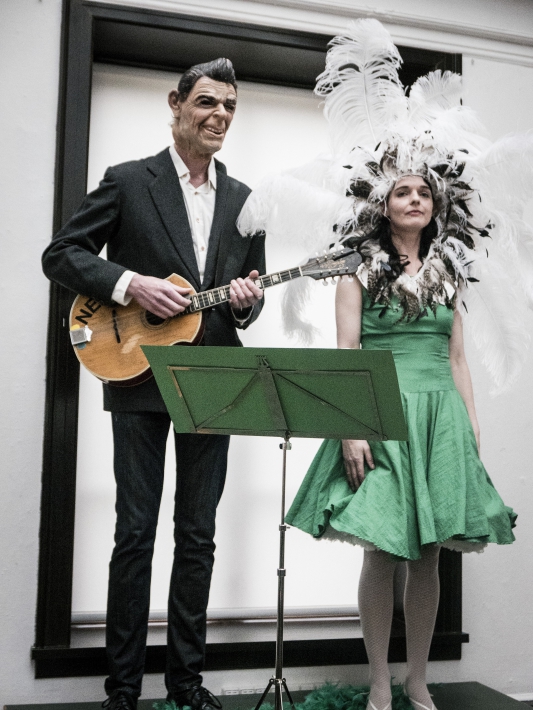 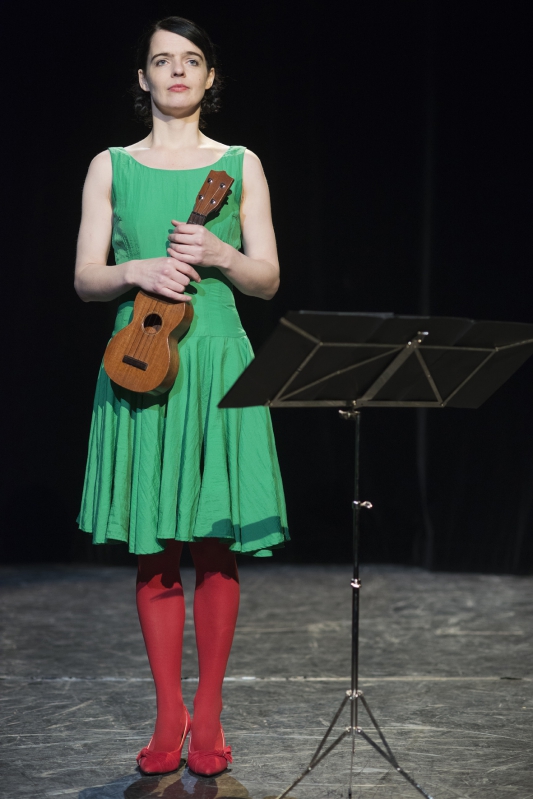 Alone on stage with her ukulele Molly Haslund seems fragile as she performs a medley of her interpretations of a wide range of songs by famous bands and solo artists. Haslund constructs a story as she performs these well known songs, added a certain twist. Here and there she inserts autobiographical elements. The compositions are based on the same concept: a clash between sweetness and innocence and cutting irony. In doing so Haslund’s interpretations elegantly change the significance of the songs.

‘I Went Into a Bar’, ‘I Went to an Art Opening’,’ I Went to a Performance Event’ ‘I Went to Art Copenhagen'’, have been performed several times in the Danish art scene since May 2011. Each performance’s title is only roughly the same – this also applies to the monologue and the story, everything is reshaped to suit being performed in a new situation. The compositions are based on the same concept: a clash between sweetness and innocence and cutting irony. In doing so Haslund’s interpretations elegantly change the significance of the songs.

I Went into a Bar, essay by Kristina Valborg Valberg
A famous movie scene from “Some Like it Hot” takes place in a train compartment, where the lovely, voluptuous Marilyn Monroe plays her ukulele and shakes her bottom, previously described by Jack Lemmon and Tony Curtis as “made of jelly”. The blond sex symbol performs “Running Wild” on her small instrument that just squeezes in between her bosom and pot-belly. Her sexuality is stated in her hourglass shape, bedroom eyes, tossing of her hair, wiggling hips, small ankles, low-cut dress and cute voice and pronunciation. It’s unsurprising that Jack Lemmon and Tony Curtis fight for her attention – even dressed in drag. As viewers we find her desirable. The scenes of the movie are ready made and our reactions follow suit.

Molly Haslund stages herself with a very disarming fragility. She embarks on a journey to sincerely dissemble what we consider familiar in our collective memory, often wearing dresses, high heels and carrying a note stand that she carefully arranges before the audience. She addresses the audience/ guests of the opening or performance in a confidential voice and begins a tale of some night she visited a bar. Her delivery requires you need to pay attention. Then she grabs hold of her ukulele and starts to play.

The ukulele is a small instrument believed to have originated in Hawaii. The name means something along the lines of ‘dancing fleas’, referring to the way the player’s fingers dance across the strings. Despite the size it resembles a shield, and combined with the note stand it acts as a barrier between the listeners/ viewers and Molly.

On the movie poster for “Blue Hawaii” manly, smiling Elvis Presley holds his ukulele dressed a red and white shirt. The plot is long forgotten but Elvis and his little instrument remain distinct in memory. His broad manly shoulders and big hands hold the ukulele, representing Hawaii, close to the heart and making it something precious. He is – or rather was – the embodiment of masculinity.

Behind her barriers Molly becomes nostalgic and she speaks about sound impressions from a late night bar, where half the guests were high, the other half drunk. We also become nostalgic, as we recognize the scene. We know this evening she describes so vividly. You needn’t frequent the art scene to recognize a booze-up or happy hour that evolves into a long night on the town. Some codes are repeated on such a night that can be compared to major public events or occurrences shared in everyone’s memory. It is like the pre-set codes that make us think Marilyn Monroe is sexy, sweet and predictable and that Elvis is masculine with his deep voice and boxer’s nose. It is difficult to compare a landslide, a tragic accident or a royal wedding with a night on the town but there are some similarities. Some patterns are universal.

The material Molly presents is nostalgic in the story and in her choice of music. The music connects to stories of smoky nights in Scotland through a medley of Beatles songs, and the Scandinavian part of the tale is represented by a mix of ABBA songs. Our national identity becomes associated to music. As Scandinavians we all have our inner cassette tapes, supplied to us as children, with sounds that connect to our sense of identity. We know all the songs and have stronger or less intimate relationships with them. Furthermore they refer to an era; a past that connects the music with memories, even for people who were born after it was produced. You can be fairly unmusical and still clap along to a Beatles or ABBA tune. The texts and refrains are simple and maybe great in their banality so they have universal appeal.

Behind her barriers Molly tests our collective memory, by using a simple procedure: she exchanges one word with another. And suddenly the simple song about holding hands becomes something more sinister. It is a little shocking to hear unexpected words uttered by the well-dressed Molly. With the shock follows laughter, like some hysterical symptom. We can no longer suppress it. It’s as if Molly’s switching around words becomes a repressed memory that has been pushed to the surface and is released in some Freudian emancipation. And we, the audience, are permitted to laugh at the naughtiness. The evenings she describes operate on something potent and sexualized. These drunken nights are hysterical symptoms acting as some kind of release for us. But Molly, almost in the role of a therapist, has seen and analysed what really lies behind it all. She points out our hidden desires, our vulnerability, and most of all; our predictability as human beings. When this becomes exposed all you can do is laugh - either as a defence mechanism or in recognition of the fact that she is speaking the truth.

In this way Molly and her ukulele does what Elvis and Marilyn never managed to achieve: Surprise us with a simple procedure that is a convincing as the simplicity of the songs and their familiar patterns.