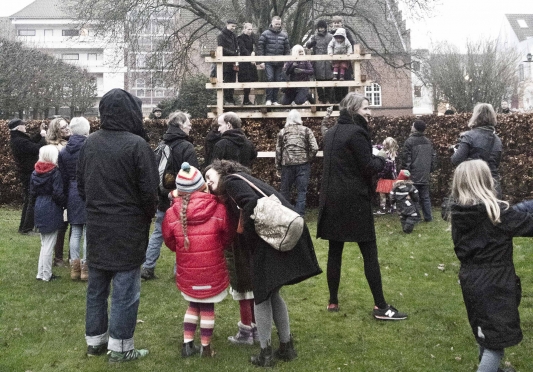 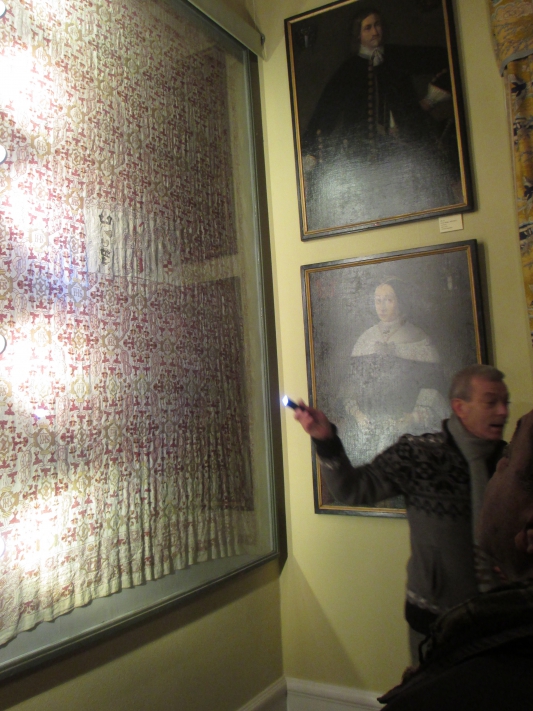 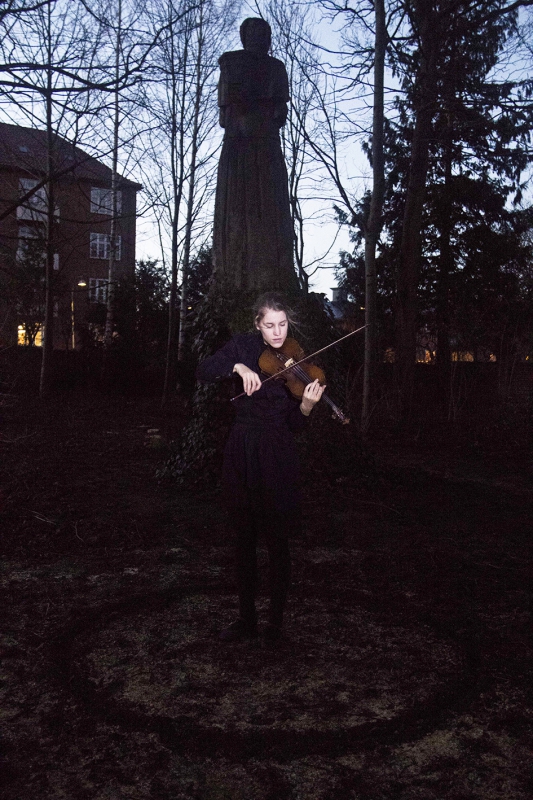 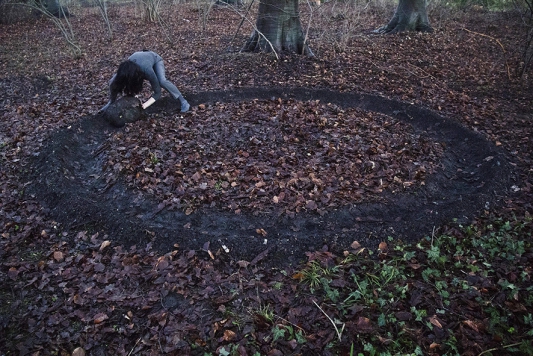 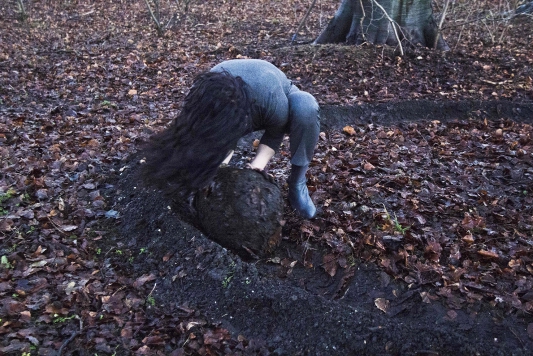 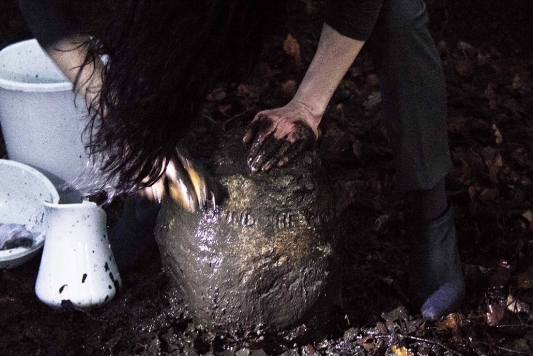 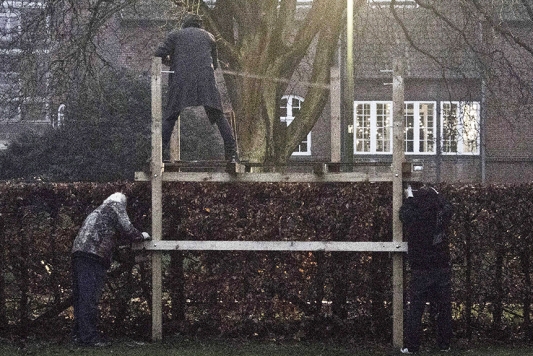 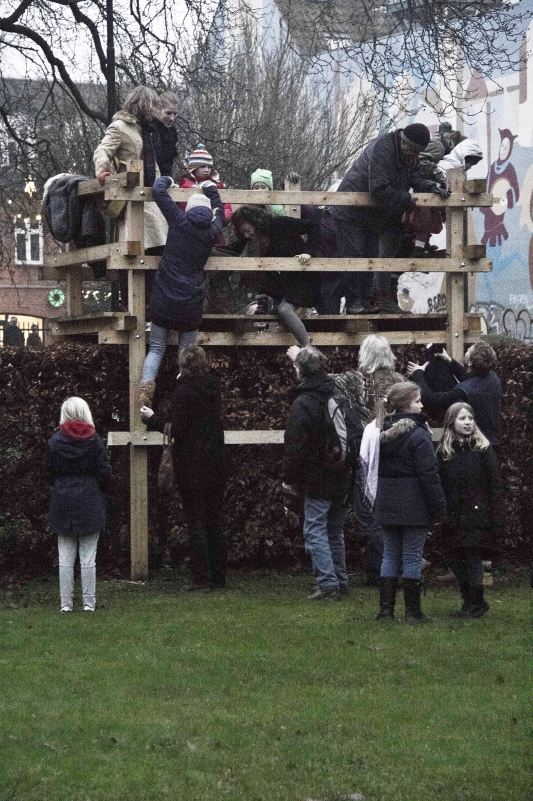 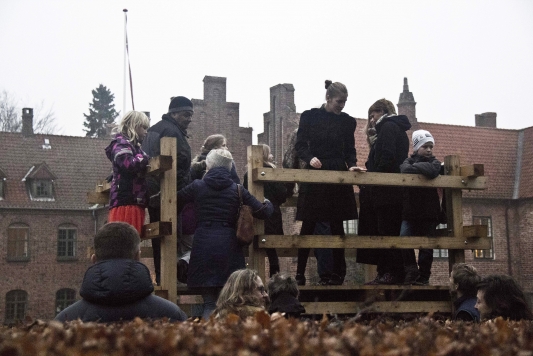 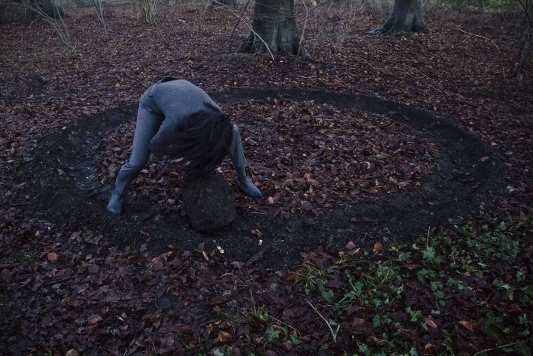 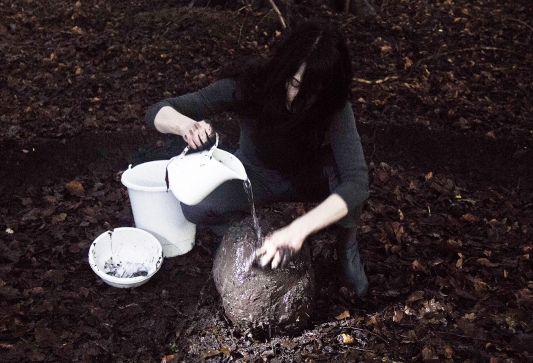 CRUEL ACT was the final performance of Haslund's exhibition ROCK AROUND THE WORLD, a site spesific performance at Roskilde Monastery.

Cruel Act (2013)
The performance begins in a small public park next to Our Lady's Abbey in Roskilde. Upon entrance, the visitors were met by Haslund’s sculptural work Balcony which, as the title suggests, is a balcony made from wood built at a height of 190 cm on top of the hedge surrounding the Abbey, accessible via the path that runs alongside the hedge and the adjacent park. From the top of the balcony, it was possible to get a rare view over the Abbey and garden, and thus provide a rare view of what would otherwise be concealed.

A performer, a young woman dressed in a black dress, invited the spectators to climb over the hedge via the balcony and down the other side of Klosterhaven (the garden of Our Lady's Abbey), and to thus begin the performance Cruel Act.

After the visitors had first climbed down the enclosing hedge, the manager of Our Lady's Abbey Roskilde began the guided tour.

During the tour, he retold the heritage of the site as well as the harsh destinies that many women had faced at the abbey, and in other parts of Denmark during the same period.

The narrative of the tour unfolded through the prompts of physical objects. Central to these tales was the story of the noble Christence Kruckow, who in 1621, at the age of about 60, was executed by beheading for condemned witchcraft as a result of an inquisition initiated by Christian IV. Kruckow had never set foot in Our Lady's Abbey, but according to the tour-manager, her story and her soul came to the monastery from Odense Noble Virgin Monastery with the “Nakkebølletæppet” a 17th-century distinguished piece of needle-craft from Nakkebølle, a small town on the Island Fynen, Denmark. The quilt bears the Kruckow family’s coat of arms. She had spent her entire youth with the family and yet these were the same people whom first accused and trialled Christence for witchcraft.

As part of the guided tour, just as the sun was setting, the guests were taken into the woods to experience the central part of the performance. Here, Molly Haslund was already in the process of rolling a large, heavy rock, the size of a head, around a deep, muddy, groove in the forest floor. This performance culminated in Haslund rolling the stone into the centre of the circle, where she washed it clean with water from a white porcelain jug. The water revealed an inscription in the stone: "Rock Around the World", after which the artist got up and disappeared into the darkness. The sound of music led the visitors on to a woman, (the same woman dressed in black from the beginning of the piece) playing the violin in a circle scratched into the ground.

The tour ended in the same garden where it had begun. The only difference was that the otherwise solidly attached balcony, which the visitors had clambered over to enter the garden, had disappeared. The disorientated visitors were now forced to find another way out. From the abbey, the road to the station was marked with chalk circles for the guests to be able to find their way home.

The entire performance with its sequence of stories, Haslund’s performances in the forest and the inscribed stone, should be understood as a tribute to Christence Kruckow and to the women who had suffered their fate at Our Lady's Abbey in Roskilde.

Translation of a handwritten text by an older audience member.

I
January 2, 2013
Cruel Act took place on December 14th, starting from a plateau or balcony that Molly had built over the hedge that encloses the Our Lady's Abbey and the garden of the Our Lady's Abbey in Roskilde.  We were approx. 45 including 6 children who met at 15.30 by the balcony. Molly was not there. The atmosphere was full of uncertain anticipation in the cold weather. There was also a light breeze. Maybe a little uncertainty about what was going to happen. There were three men in work clothes and a girl dressed in a black Victorian dress, who stood out a little. She announced in English with an accent when it was a just past 15.30 that now we were all supposed to climb the balcony and the hedge, climb up the plateau, enjoy the view towards the monastery, and then climb down on the Abbey’s lawn. A little unsure, we set off. It was difficult. There was no definite ladder. Not even a staircase,

II
but a couple of beams had been screwed on, - horizontally- so that it was possible to climb up. On the other hand, where we had to crawl down, there was only one beam to step on. Children and the elderly and others hesitated. Some were quite anxious, but two of the work-dressed men offered to help - and stood ready to help: it was now rather difficult anyway, and many got small cuts on the sharp-edged beams; Yes a little 50 year old man tumbled down, and lost his purse and glasses. By the time we were all down on the grass, we were well acquainted with each other after the hardships. The steward  of Our Lady's Abbey arrived and introduced himself, and now asked us to follow him and join at a brisk pace, as there was much we had to see and hear. Already by this point he gave us the impression, as a competent and exciting narrator.

III
Inside the monastery it was dramatically beautiful. High-ceilinged, small and large halls and rooms. A clean museum with countless fantastic paintings, furniture, candlesticks and porcelain, and textiles dating back to 1700. Along the way up the wide carpeted staircase, the steward stopped 3 times told painted engaging stories based on pictures and other objects. First he told us about what it had been like to be a nun. For some, from when they were quite young; 13 years to…indeed life. A life of prayer and spiritual contemplation. He spoke about the small window that was in the outer wall around the monastery area, where the nuns occasionally were allowed access so that they could look at ordinary life for a little while. At the next landing we heard about victims of witch trials, about torture and witch-burning. We were led into a room further inside the Abbey. Here the steward drewand

IV
aside a light-protective curtain, which covered a large glass display case that filled up half of the wall and revealed a very delicate embroidered blanket from the late 16th century. The blanket was originally a gift from Our Lady's Abbey in Odense (a city on the Island Fynen) The embroidered coats of arms on the rug turned out to refer to a cruel story of a noble virgin Christence Kruckow, who was repeatedly accused of witchcraft and also several times, as the trustee put it, "came under embarrassing interrogation", which in our days means torture. Her life was ended by being beheaded. The steward explained that Christence’ spirit stayed with the blanket came with the blanket, or he indicated that her soul was still present around the convent, just as it was with many of the other women who had lived their lives at the convent through the ages.

V
We were still freezing even though we had been indoors for quite a while, and when, after the gruesome and very vivid tales, we were let outside through a door leading out to the backyard of the monastery, the weather had gotten worse. Drizzle, wind and cold. In the 20 minutes we had been inside, it had become dark.
The monastery steward led us 30-40 meters down to a small forest and bog-like grove where there were low bushes and tall, gloomy, straight-stemmed trees. We could not see much, but blindly followed the steward at a slow pace, and could feel that the ground was moist and saturated. Soon we saw something move in a small clearing between the trees. Now we really froze. What we saw moving turned out to be Molly, wearing a gray suit with rolled-up sleeves pushing and rolling a large seemingly heavy rock or lump of earth in a circle about 4 feet in diameter.

VI
"Here we see Molly," said the steward of Our Lady's Abbey. "She rolls a stone around which she found when she dug holes in the ground for the beams before setting up the balcony, which you crawled over before," Molly alternately crawled on her hands and feet and pushed the stone evenly in the circle for up to several laps. As our eyes got used to the darkness, a clear, black, circular trail appeared in the autumn foliage of the forest floor in the path of the stone. As she had pushed the stone around repeatedly, Molly and the heavy stone were almost at one with each other.
We now froze a lot, and were quiet as mice. No one left the site. I think that the fact that we were chilled to the bone, and that Molly in her thin clothes and her rolled up sleeves and muddy wet hands, had to freeze much more, made us stunned and in solidarity.

VIII
After many, many laps, the circle was drawn quite clearly, and then Molly half rolled, half carried the stone and placed it upright in the center of the circle. The stone had almost the size and shape of a large head. She fetched a white jug and a white bucket of water, a brush, and a cloth, which she placed outside the circle. The lump, which now turned out to be a granite stone, was now washed and rinsed in several jugs of water. The steward of Our Lady's Abbey discreetly handed out small flashlights to us so we could see the circle track and the granite stone where the engraved words "Rock around the world" appeared during the wash. We shone the light onto the stone. Molly got up, stepped out of the circle, and disappeared into the darkness. The tones of a violin now guided our attention a little further into the woods, where a tall girl, the girl in the black Victorian dress, played the violin as we passed by.

VIII
We walked past in amazement, still quietly, slowly following the steward of Our Lady's Abbey through the wet ground of ​​the monastery garden and suddenly found ourselves on the same lawn we had crawled, fallen and jumped down onto from the balcony. The monastery steward pointed to the hedge, where we entered via the balcony and says "So, now the scaffold (the Balcony) is gone". "Thanks for tonight".

Yes. The balcony has totally disappeared. It seemed like magic. It was not there. Maybe for a moment we felt a little robbed. And then - we slowly seeped away in small groups out of the Abbey gate to the sidewalk and streets where we followed white circles that had been drawn on the ground to lead us back to the station, while they faded more and more by the rain.