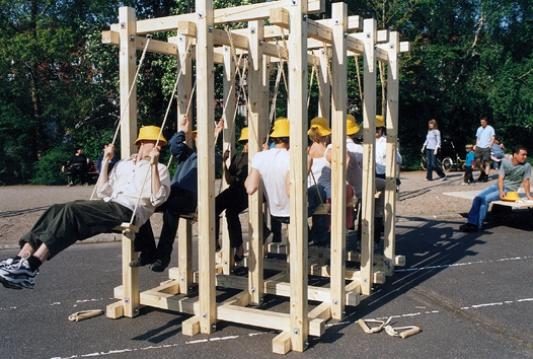 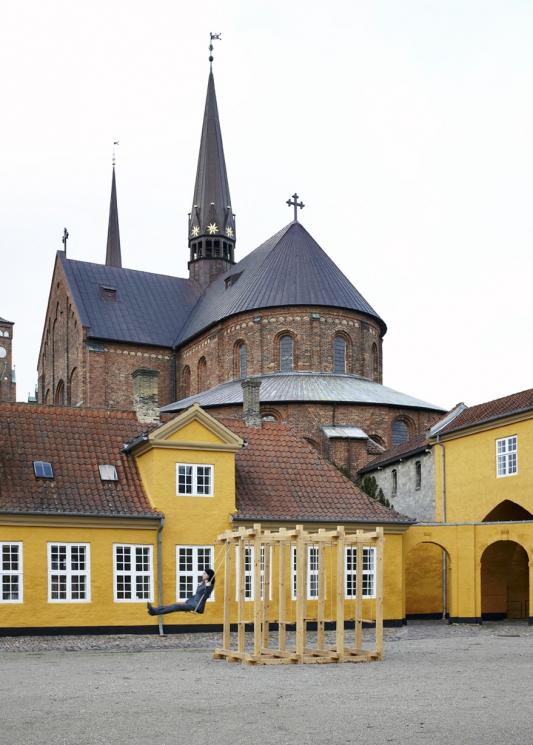 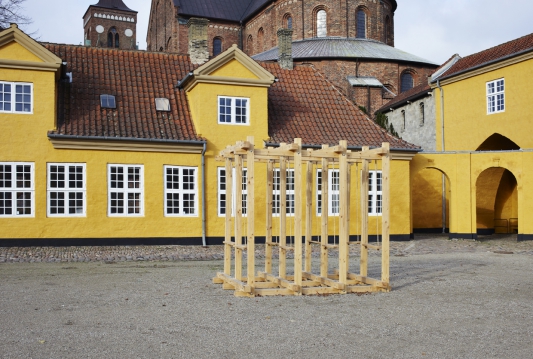 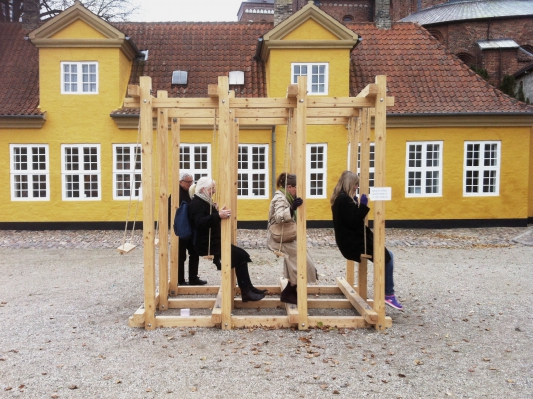 Molly Haslund works with audience participation in the pieces Coordination Models, which is a number of modified devises designed to challenge the participants. Familiar objects like skipping ropes, hopscotch frames and swings are integrated in various kinds of utility systems, where coordination and collaboration between the individual participants becomes imperative. The individual participant’s motor skills are challenged as well as their ability to coordinate group movements in order to make the systems in the coordination models work. When this succeeds a common rhythm is generated that transforms the utilities from commonplace play objects to complex collaboration modules, where the individuals and the group are dependent on each other.

Swing Seat Construction, Coordination Model I
Trapholt and Art Parade 2002
Swing Seat Construction is Haslund’s first coordination model and was her contribution to the Copenhagen Art Parade (Kunstparade 2002). Swing Seat Construction consists of a large wooden frame made of unprocessed timber holding two rows of swings, four in each, situated so close that people must swing in unison in order not to collide. The Art Parade was hosted by Lone Bank, Christina Hamre, Dorthe Buchwald and Tanja Rau from the The Royal Academy of Fine Art (DK) and started in the Charlottenborg Courtyard and crossed the city of Copenhagen to the Enghave Park in the Vesterbro district. The parade stopped off on centrally located Nytorv/ Gammeltorv and at Skt. Hans Torv in the Nørrebro district. The Swing Seat Constriction was utilised on these locations. A team of six people wearing yellow hats lowered and raised the swing on a big trolley that transported the swing during the parade. Swing Seat Construction and a slow-motion documentation video of the parade was shown at the Konglomerat at Trapholt.

''All the works relate in an active way to the concept of imagining possibilities and limitations of physical, contemplative, individual, mental and social space. They possess social connections as an immediate option but loneliness is also present and there is even an evil side to them, which can appear quite fast and get out of hand. Paradoxically the works seem to provoke both directions and you must decide what you’d like to get out of them, and how far you will go. So there will be a clash between what you see, between the idea of ​​the object’s function and what actually happens, what the objects actually are''
Exerpts from interview with Anne K. Iversen

A swing……
In the summer of 2002 the exhibition ”Konglomerat” was shown at Trapholt presenting the sculpture students at the Royal Academy of Fine Art (…) For this exhibition Molly Haslund created a so-called “Coordination Model”; a large wooden frame holding two rows of swings – 8 in all - hanging so close that people needed to coordinate their swinging in order not to collide. The swing was made of unprocessed timber and appeared as a sculpture - also when unused. It was partly identifiable as a toy (that swings are) but it also became alienated within the museum framing. The close hanging of the swings and the frame itself created a defined and new space for the swings. It was not possible to experiment with the swings’ force of gravity, as a lack if control or coordination would result in collisions and accidents. In this way Haslund has created a piece that seems inaccessible and it poses a number of interesting and existential questions.
Extract of text by Karen Grøn, Trapholt 2002