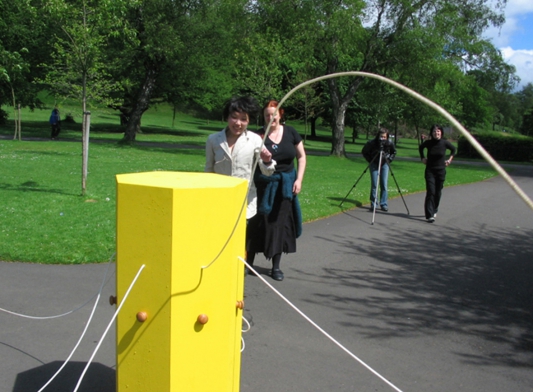 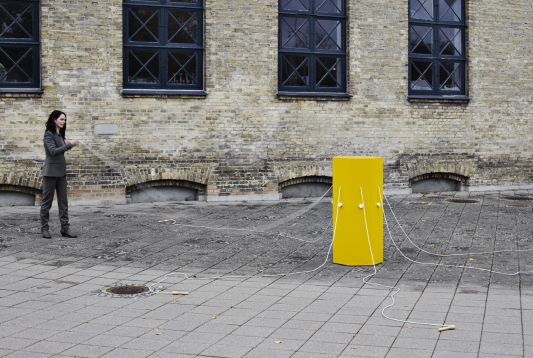 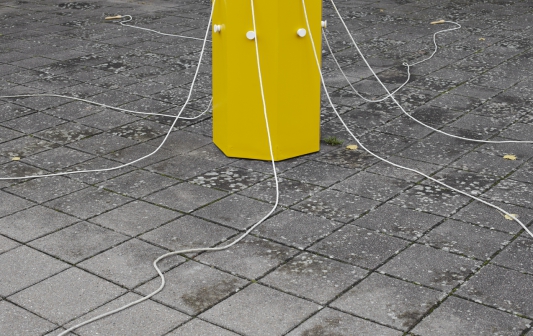 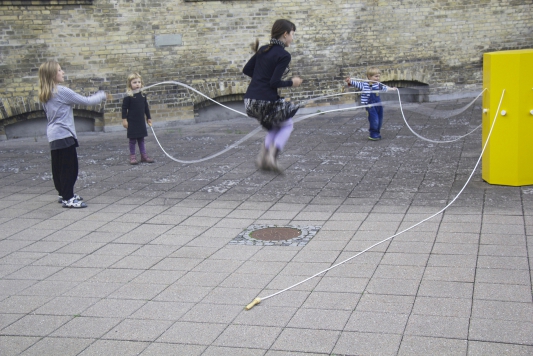 Molly Haslund works with audience participation in the piece Coordination Models, which is a number of modified devises designed to challenge the participants. Familiar objects like skipping ropes, hopscotch frames and swings are integrated in various kinds of utility systems, where coordination and collaboration between the individual participants becomes imperative. The individual participant’s motor skills are challenged as well as their ability to coordinate group movements in order to make the systems in the coordination models work. When this succeeds a common rhythm is generated that transforms the utilities from commonplace play objects to complex collaboration modules, where the individuals and the group are dependent on each other.

''I’m clearly testing out ideas about the individual and the group - but we aren’t playing in the 'get-back-to-nature' way. It’s not a Rudolf Steiner concept, though they are all placed in more or less green parts of Roskilde, and positioned to blend in with the surroundings you won’t encounter the soft nature. There is something totalitarian and dictatorial and constructed about the objects and, how can I put it, a bit of alleged extreme social democratic thinking is built into them, in their function and in the coercion of the direct functional use. These are ideas we recognize from other contexts: From the history of design, utility, from institutions, from school breaks, from math lessons, from physical education classes ... Yet my objects are dictating in a space where you can use this 'force' for whatever you like and even get high from it. As a starting point there is no body in charge and this often leads to something I can’t quite define ... a kind of giddy euphoria, somewhat chaotic once you embark on it…''

''All the works relate in an active way to the concept of imagining possibilities and limitations of physical, contemplative, individual, mental and social space. They possess social connections as an immediate option but loneliness is also present and there is even an evil side to them, which can appear quite fast and get out of hand. Paradoxically the works seem to provoke both directions and you must decide what you’d like to get out of them, and how far you will go. So there will be a clash between what you see, between the idea of ​​the object’s function and what actually happens, what the objects actually are.''
Exerpts from interview with Anne K. Iversen