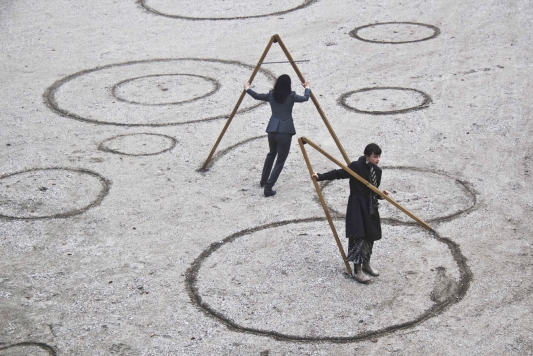 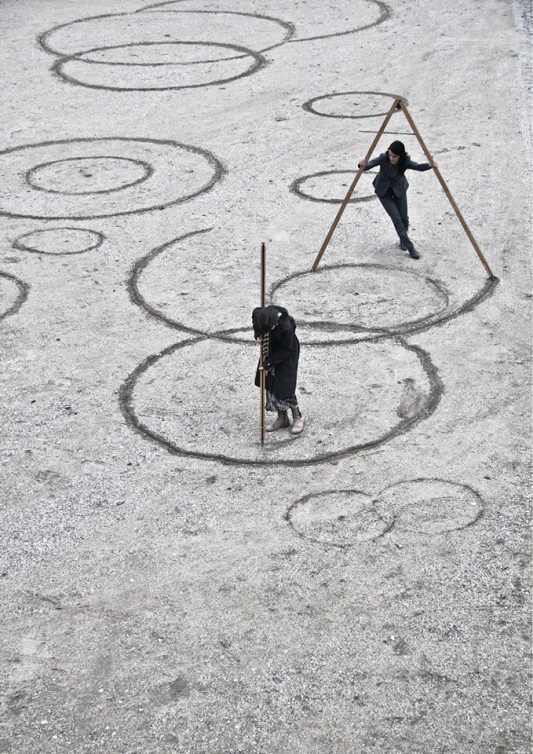 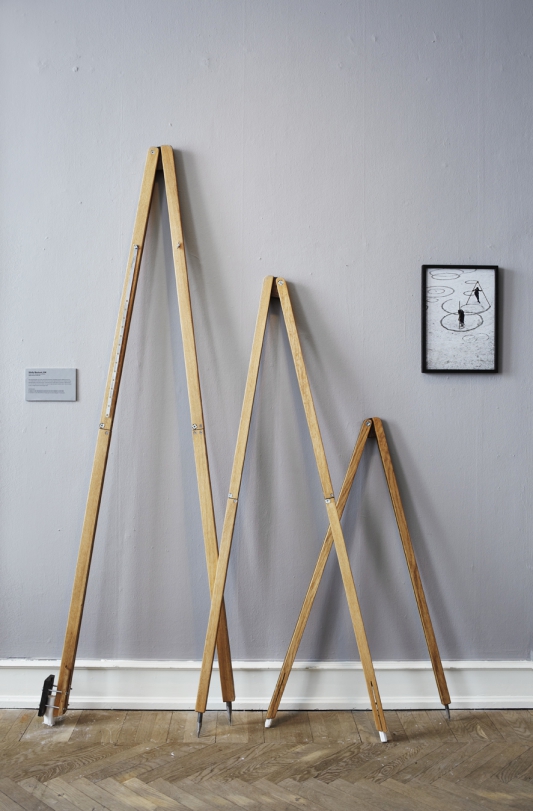 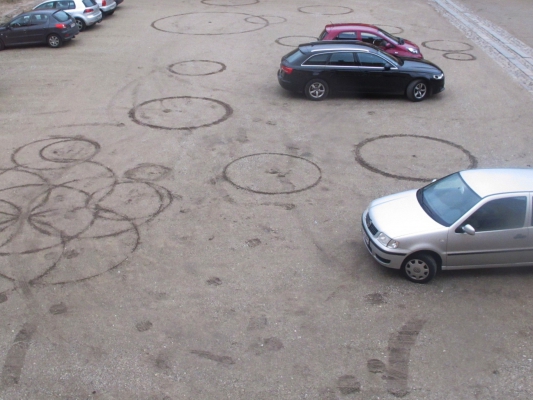 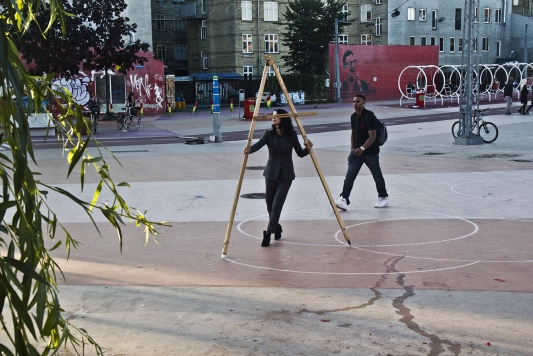 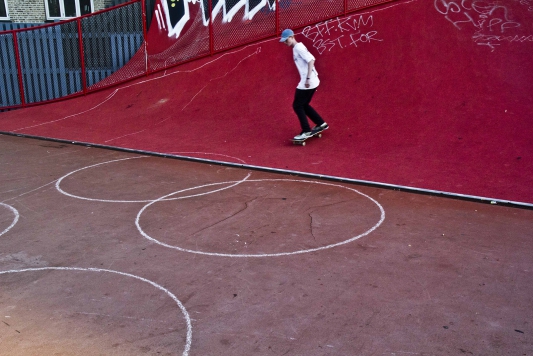 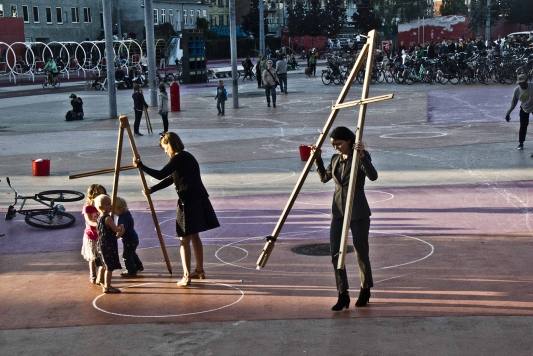 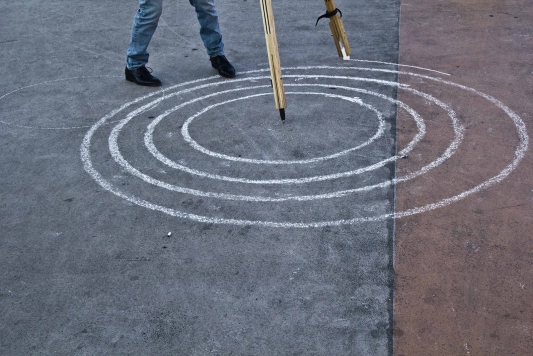 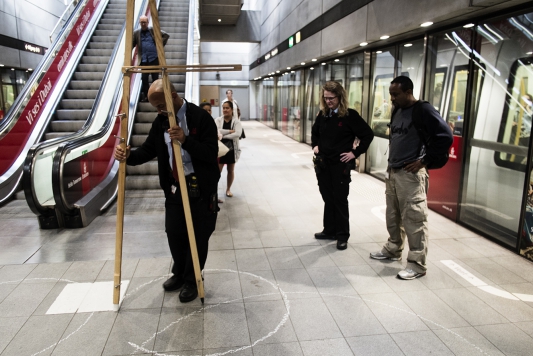 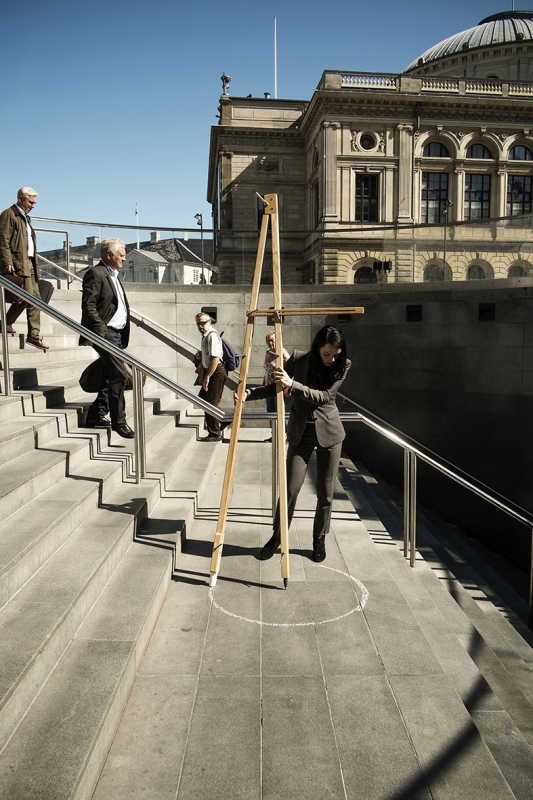 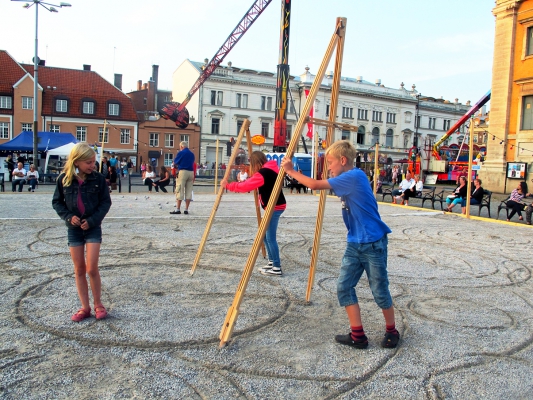 
The performance Circles was performed for the first time at the exhibition Rock Around The World at Museum of Contemporery Art, Roskilde 2013

Molly Haslund ventures out into the city wearing grey: a grey suit, grey socks and grey shoes so that she blends in with the tarmac and the pavement. She carries a huge pair of compasses much taller than herself. She stops somewhere and starts drawing a white circle on the ground. She completes the first circle and then moves the pair of compasses and starts drawing a new circle that overlaps the first one. She draws a third circle and stands in her grey shoes in the middle of the circle for a moment before snapping the pair of compasses together and moving on.

Molly Haslund works in the space between installation and performance and has built a series of structures, which she puts up in Roskilde for the exhibition Rock Around the World. Structures – which Haslund also calls ’coordination models’ – call for public interaction and involvement as they set the stage for Haslund’s own performances. Consult the map to find where the sculptures are located.

Molly Haslund’s models are a physical reflection on how we use and move around in urban space. She chalks out lines for an investigation of how hedges, walls, lines and other abstract enclosures demarcate and define our scope of action.
Anne K. Iversen

'My performance CIRCLES can easily be understood as a meditative act: It includes repetition and one revolves round one’s own centre, becomes dizzy and to some extent disorientated. One will have to just focus on drawing the circles. Initially I probably imagined that I would embark on this alone but then it becomes like a closed work merely focused on the performer and the mystical, yet I’d find it sad, or boring if the possibility to break the space wasn’t an option. So the focus is on the physical action, on the movement of the circles, and the patterns emerging and disappearing again – and of course the effect grows with the number of participants. on the other hand, if you want to draw alone, you can just withdraw a little from the rest. A bit like on the dance floor.''

''Overlaps may well occur both on the physical, drawing level and in the social meeting space, or in actual the artwork. Opportunities for a possible, fleeting encounter certainly present themselves here. Basically I start drawing alone but it’s clearly in the hope that something will happen and others who want to draw will join in. I have three big compasses, so it is intended. But if no else draws, I'll gladly do it alone for four hours.''

''The oversized compasses undermine the original idea that its function is a small, mathematical tool. There is something appealing about drawing big circles and then drawing on top or seeing it being milled through by a second circle – it’s like making wheelie or reconstructing something by alternating between aggressive, brutally precise mathematical thinking and a divergent concept magical, 'soft' circles.''

''Regarding the object you’ll find it hard and heavy. It has many screws and a very pointed end, which stands firmly on the ground. The tips can be peeled off like on a small compass – and they certainly won’t pass through the airport security check, if found in your hand luggage. So far I have only used the compasses once in Roskilde besides at the opening of the museum's courtyard - on the square, close to the museum. During the 4 hours of the performance there was a lot of activity. Many people just happened to be passing whilst shopping and drew for five minutes - some returned after visiting the shops, and there were plenty of momentary exchanges of glances, techniques and patterns that would once again disappeared into the bigger picture. Finally it looked like one, huge doodle system. In this respect the compasses obtained a rather subtle purpose. I also hope that the humour is evident of the mathematical magnified object and the little person drawing directly on to her world.''
Excerpts from interview by Anne K Iversen, September 2013