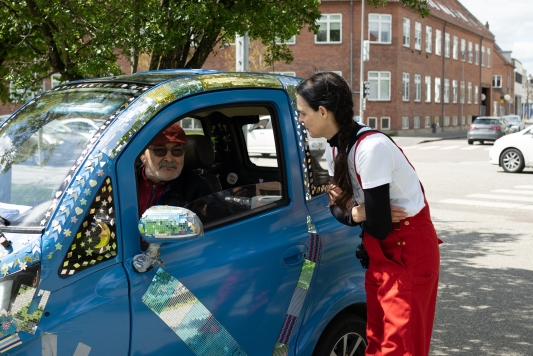 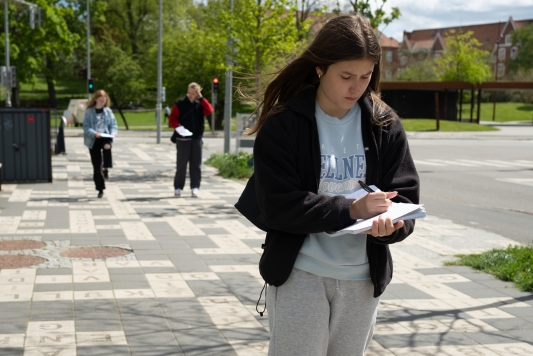 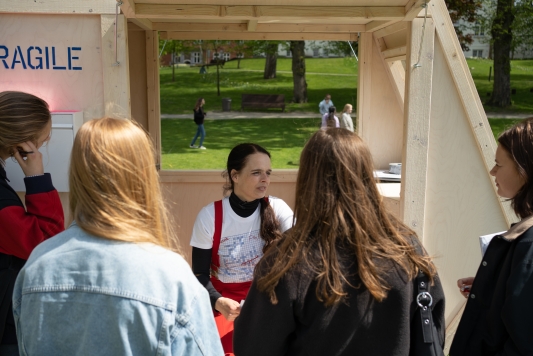 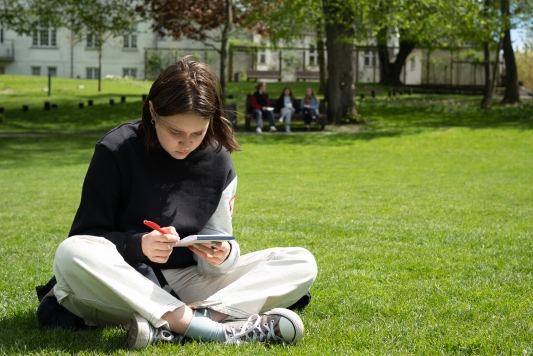 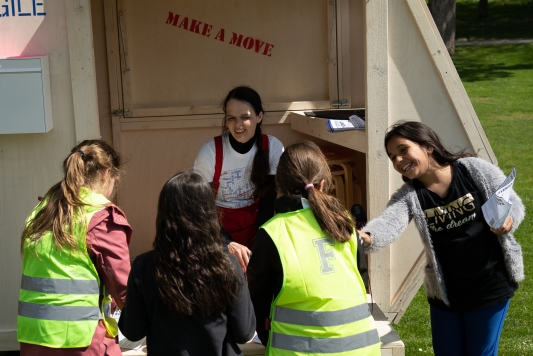 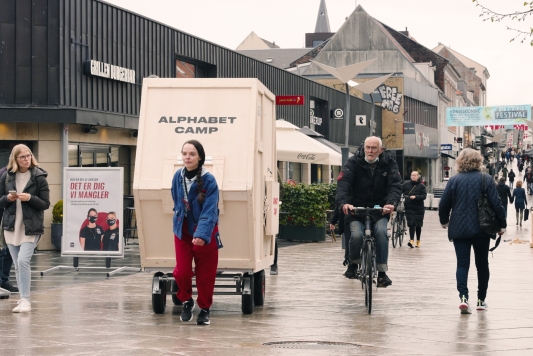 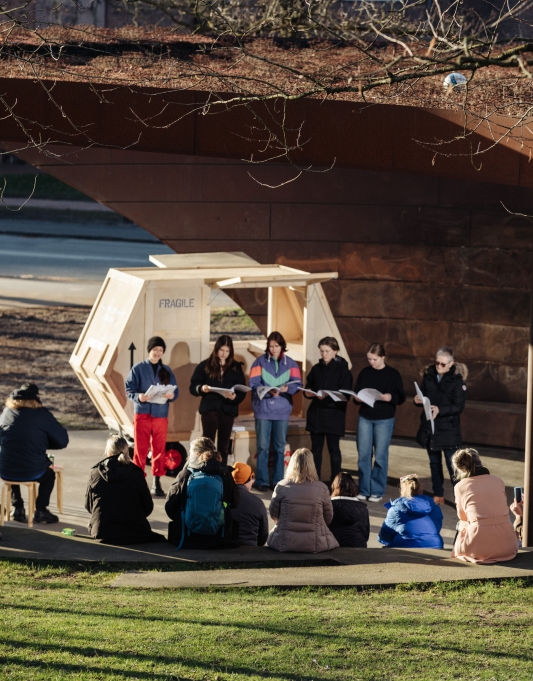 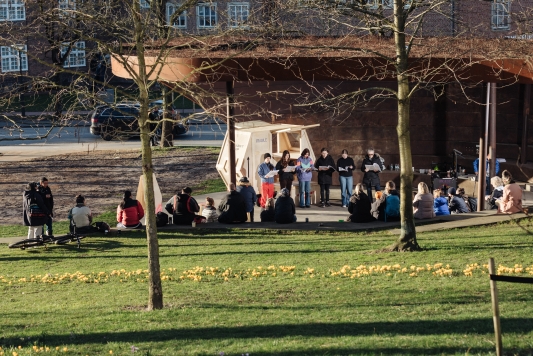 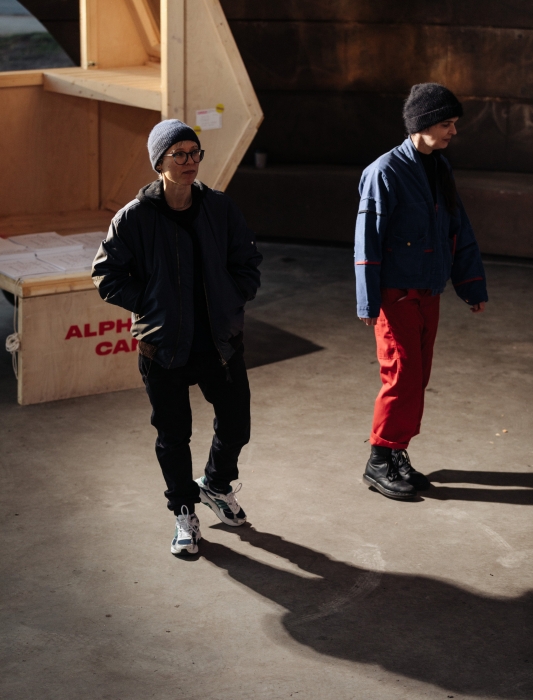 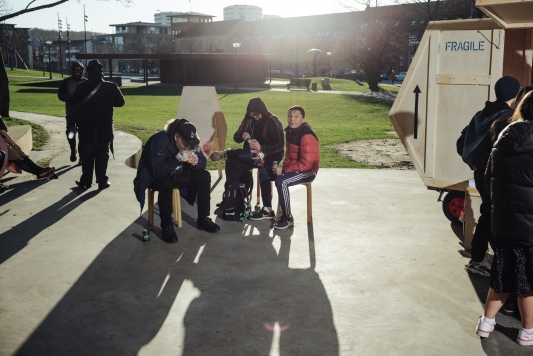 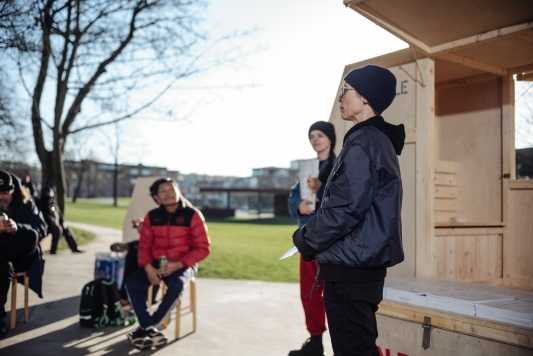 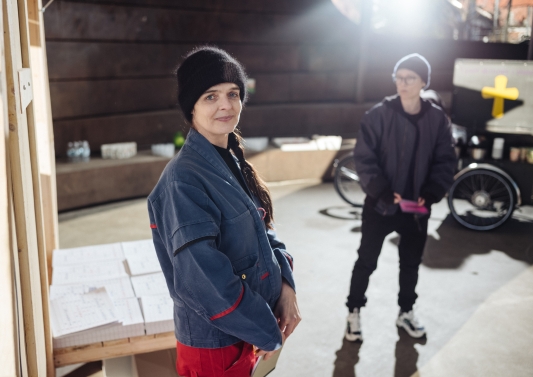 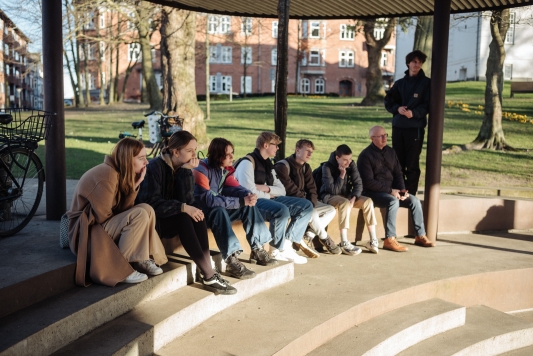 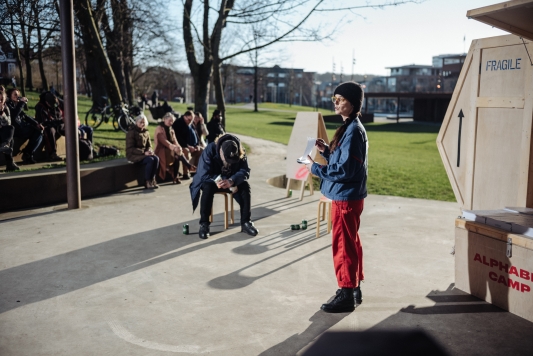 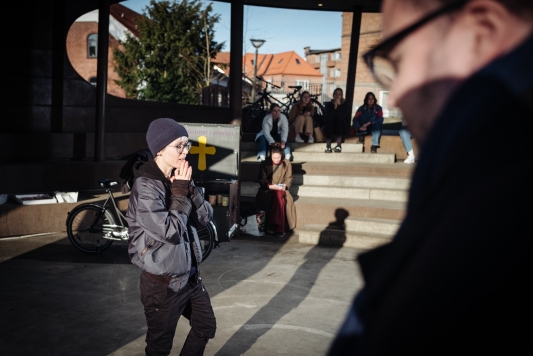 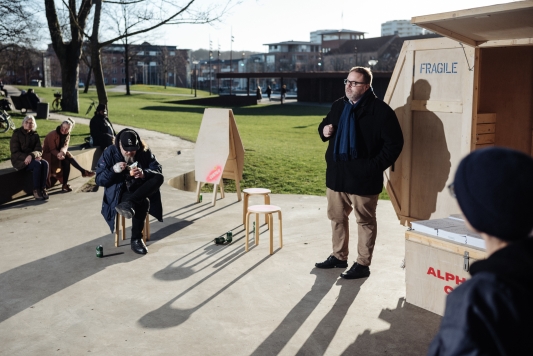 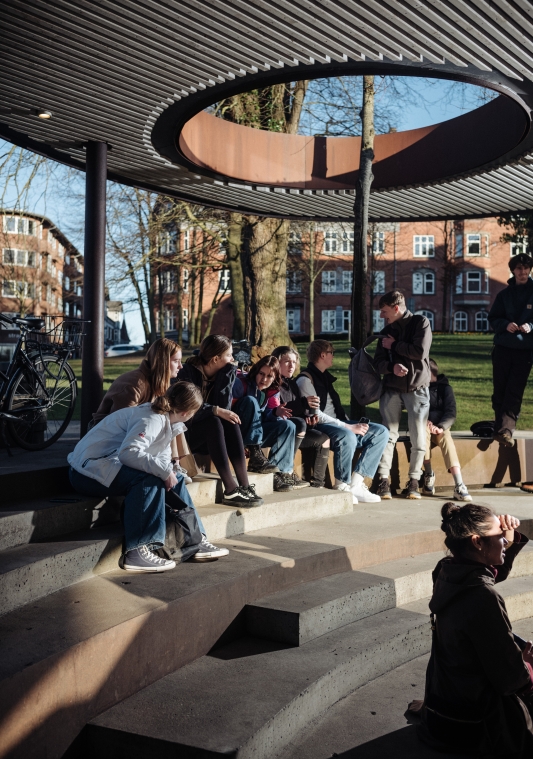 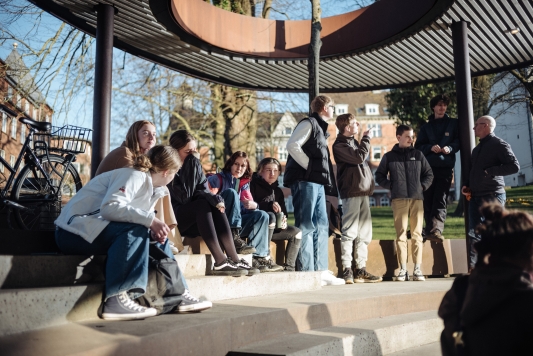 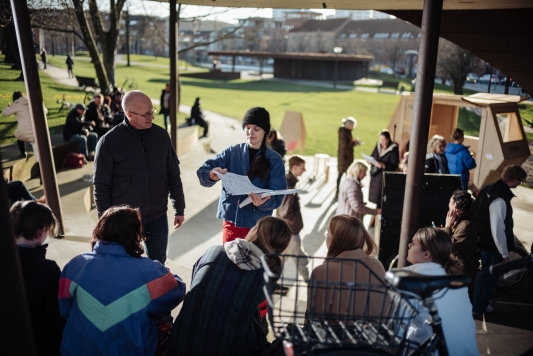 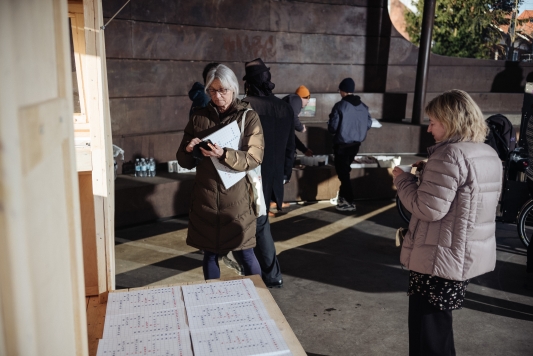 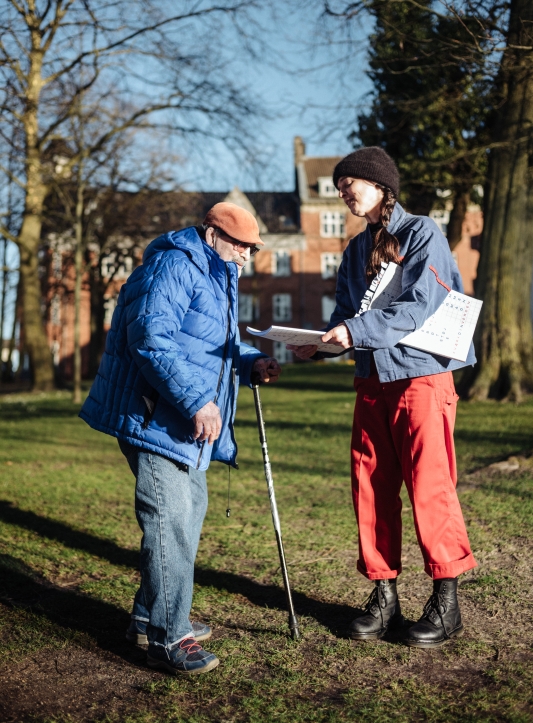 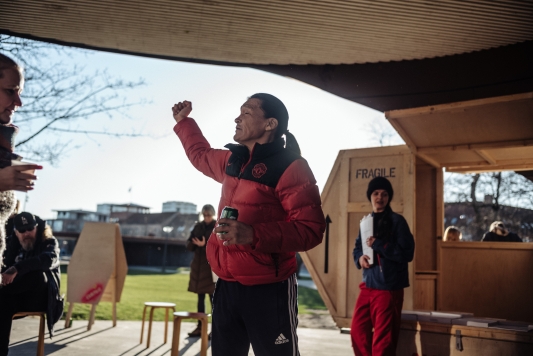 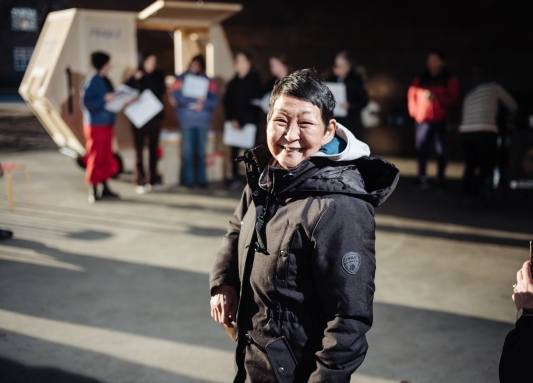 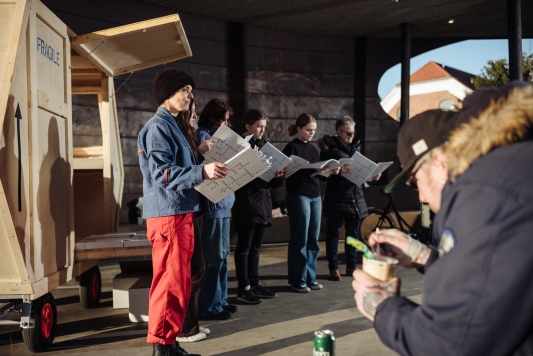 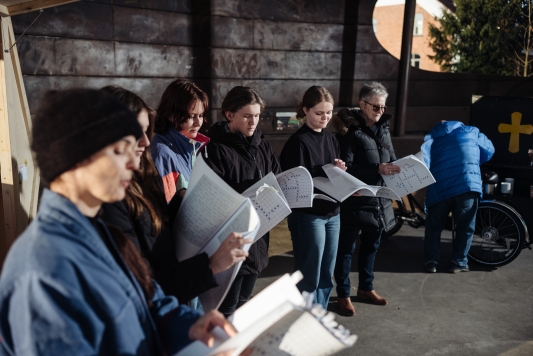 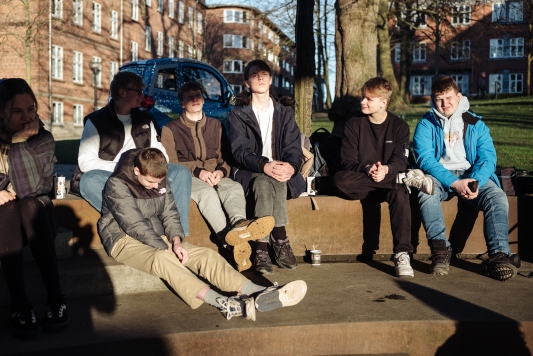 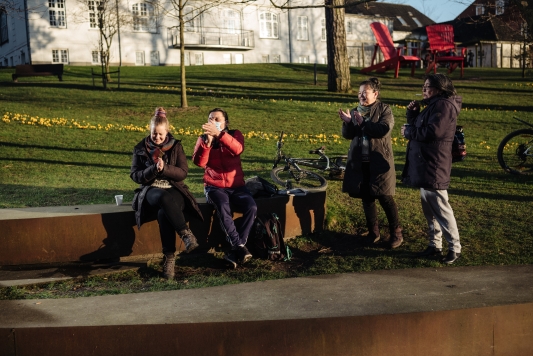 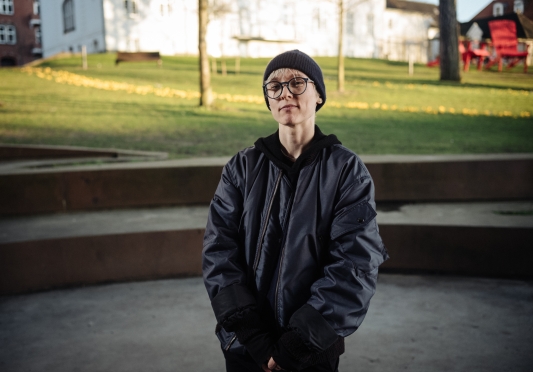 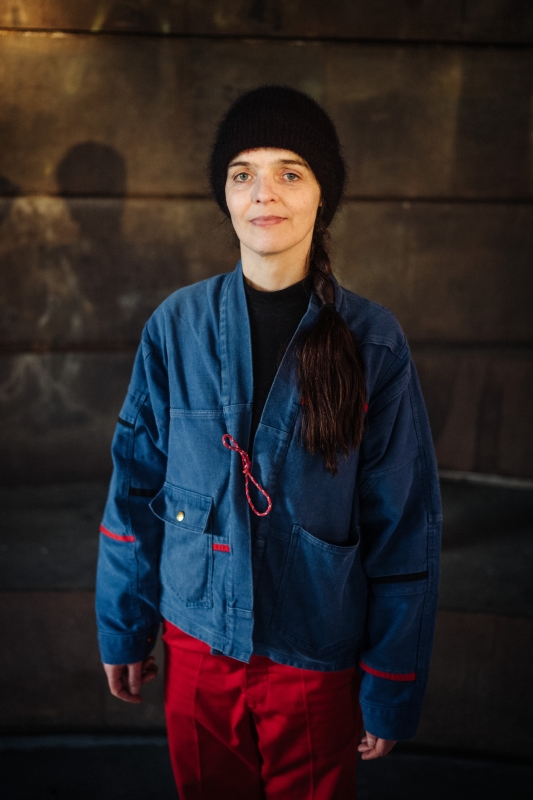 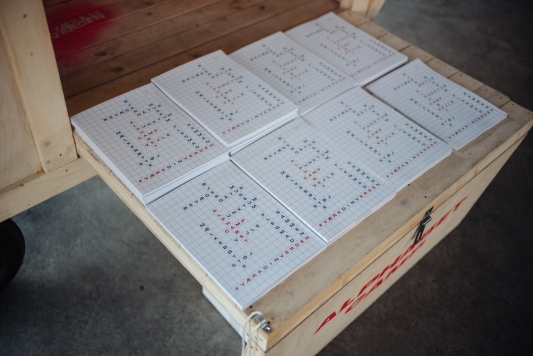 Alphabet Camp was created when Værk Din Verden invited Molly Haslund to create an engaging artwork in Vejle, based on artist Anders Bonnesen's public work 'If you don't know where you're going, all roads will lead you there' (2018).

Bonnesen's pavement in Vejle is made of concrete tiles, some of which are sandblasted with letters that form words borrowed from well-known authors' texts about moving through the city. The words run like a criss-cross along Flegmade, forming a 500-metre-long poetic pavement.

In Alphabet Camp, Molly Haslund appears in blue and red work clothes and with a custom-built caravan. In May 2021, you could meet her and the caravan in the centre of Vejle. Over 4 weeks, 4 days a week she spent 6 hours a day at Søndertorv, Rådhustorvet, Mariaparken and Flegmade.

Here she was joined by random passers-by, school classes and clubs, and every Sunday she had invited a fellow artist to visit Vejle as part of the project; Tanja Nellemann, visual artist from Aarhus, Shëkufe Heiberg, poet and performance artist from Copenhagen, Khalid Albaih, Sudanese cartoon activist and journalist from the 2-year ICORN artist-in-residency programme in Copenhagen, and Tomas Lagermand Lundme, visual artist and writer from Copenhagen. They presented ways of working with text or drawing, and people in the city were free to join their workshops.

Each day, the caravan was towed through the city to the venue of the week. Here it served as Haslund's office and as a meeting point. From the caravan, she invited people to write about the city in guided writing assignments, using Bonnesen's pavement as a starting point or source of inspiration.

Participants could hand in their texts directly to Haslund, or in a post box, on the side of the caravan, if they wished to remain anonymous. As the texts were handed in, they were photographed inside the caravan.

Haslund had also set up information and writing stations at Vejle Library, Spinderihallerne, Vejle Art Museum, and the book café Byens Forlag, where flyers, pads and pens were available to take away or use on the spot.

Molly Haslund invited anyone interested in the city to join her on walks where people walked and wrote at the same time, searching their surroundings for words. Words were picked up from the asphalt, from the paths, the grass, the cobblestones or directly from the pavement of Flegmade.

Some of the texts that were written are simple; perhaps just a few words with immediate messages, greetings and thoughts. Some texts have the character of lists, sketches or poems, while others are personal, descriptive or abstract.

As often seen in Molly Haslund's participatory works, in Alphabet Camp she creates a framework for an action, but leaves the embodiment to the participants. In the dual movement between the frame and individual expression, the works take on the character of co-creation.

In the Alphabet Camp catalogue you can browse through photos from the project, see all the handwritten texts, sketches and notes that were handed in in Vejle, and read Molly Haslund's diary entries from the four locations in the city where the Alphabet Camp van was parked.
Each section begins with a diary text and ends with a broadside, made by one of four invited guest artists, inspired by their visit to Vejle. The handwritten material is placed centrally in the chapters corresponding to the weeks when they were submitted, at the place and time when the contributors met Alphabet Camp. The contents of the book can be seen as free statements and poetic impressions, which together with the pictures provide a collective portrait of the city of Vejle in May 2021.

Alphabet Camp was created for Værk Din Verden, a project by Another Public, which uses art to create conversations with people about their city in different places in Denmark.

Supported by the Danish Arts Foundation