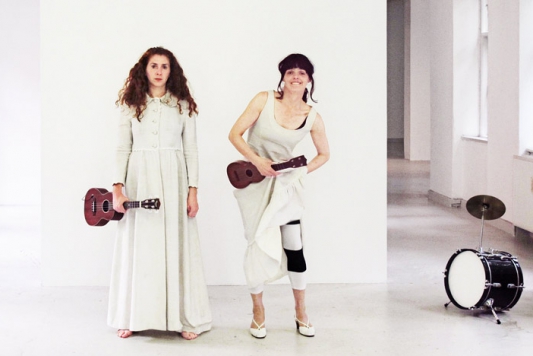 The artist duo Molly Haslund (DK) and Catherine Hoffmann (UK) have joint forces to develop the multi-aesthetic project Molly and Me. Their musical performance, Tramp went on its first Danish tour in the summer of 2011.

Tramp is a new performance series compiled of compositions and dialogues developed by Haslund and Hoffmann in Glasgow, where the two women met in 2007. Later they continued the work in their hometowns: Copenhagen and London.

By applying a simple DIY approach the duo use their voices, and a couple of instruments, to address contemporary topics such as political demonstrations, consumer greed, teenage suicide, the lives of animals, love and friendship. Experience and observation from previous tours in Germany and the UK are combined with new observations from the Danish tour.

They are dressed all in white, looking like brides or confirmation candidates. Their voices are fine and feminine in this anonymous gallery space. But this is where all purity and gracefulness ends. If you pay attention you’ll notice that their lyrics are ruthless and twisted as they perform accompanied by ukulele. Providing humorous descriptions of everyday situations dealing with friendship, consumerism, suicide attempts, love and animals.

The artist duo Molly and Me consist of Danish Molly Haslund and British Catherine Hoffmann, who have trained at The Royal Academy of Fine Arts (DK)/MFA, Glasgow School of Art and Dartington College of Arts. In the performance Tramp they have combined the absurd, Dadaist tradition of sound and nonsense poetry with political, satirical undertones, adding a feel of montage and cabaret to the performance.

One catchy tune replaces another and gets spiced up by monologues/ speeches directed at the audience. These are supported, or contrasted, by ungraceful choreographies. The lovely girls jump awkwardly, throwing about their arms and legs, exclaiming sounds like: Huh! Hah!

As if by magic they shed their skin halfway through the performance. After a brief spell behind a temporary wall they return in broad striped costumes associated with past traditional prison clothing.

Questioning the feminine
In this way the duo comment on issues such as identity, gender and femininity. Possibly the performance Tramp poses underlying questions to stereotypical concepts of femininity through what can superficially seem as traditional female strategies.

Yet, under the performer’s fragile exteriors lies an unsentimental power, expressed physically through the awkward choreography and texts. By exhibiting themselves they sing about being ‘on the road’ and about the desire to kill and coldly turn their backs on a relationship or friendship.

The performance is concurrently fine and raw, fragile and ironic, serious and sarcastic. As a spectator it is a positive challenge not exactly to know what you are witnessing or what to think.

The performers play with identities and carefully shift traditional indicators of female homosexual behaviour but without selling out traditional feminine values.

The theatrical
Furthermore the piece playfully toys with the concept of art. The audience is kept at a distance, like in a traditional concert, opposing many contemporary performance art pieces that invite audiences in somewhat sanctimonious ways to participate.

The performance comes across as unpretentious, funny and sensitive, moving between articulated authenticity in the songs and our experience of the theatrical expression.

Of course Tramp is art, the performers are in a gallery, they change costumes and play with performing roles. In this way the performance also displays how we play various roles in our lives, how we reinvent ourselves all the time and renegotiate our identities as we retell our life stories.